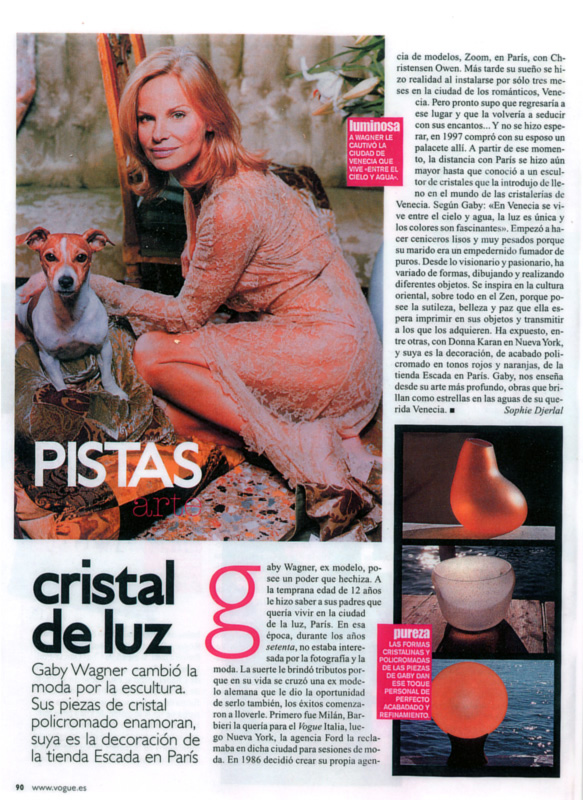 Gaby Wagner, a former model, with a great artistic power. At the age of 12, she told his father that she wanted to live in the city of light, Paris. At the time, during the Seventies, she wasn’t interested in photography and fashion. Her fortune began thanks to the meeting with a former German model who gave her the opportunity to start her career, characterized by many successes. At first she was in Milan, where Barbieri wanted her for Vogue Cover Italia, then in New York, where Ford called her for the fashion season. In 1986 she decided to create his own fashion agency, Zoom, in Paris, with Kirsten Owen. Later her dreams became true in the city of lovers, Venice. She knew that soon she would return to that city: in fact, in 1997 she bought a palace with his husband. From that moment, increased the distance with Paris, but, in Venice, fortunately she meets a craftsman who introduced her into the world of glass. Gaby says: “in Venice we live between sky and water, the light is unique and the colors enchant“. Thanks to her husband’s Cigar smoking habit, she began to create regular and heavy ashtrays. Then she varied in shapes by drawing and making different objects. Her inspiration comes from the oriental culture and, in particular, from the Zen concept from which she hopes to be able to take the concepts of beauty and peace that she will then try to make in her works. She exhibited with Donna Karan in New York and her red and orange trim was used in Paris by the Escada store. Gaby emerges for the creation of works that shine like the stars that reflect the waters of her loved Venice.